A selection of anti-war songs, by greats such as Joan Baez, Bob Dylan & Eric Bogle. Lyrics and links to audio and video. 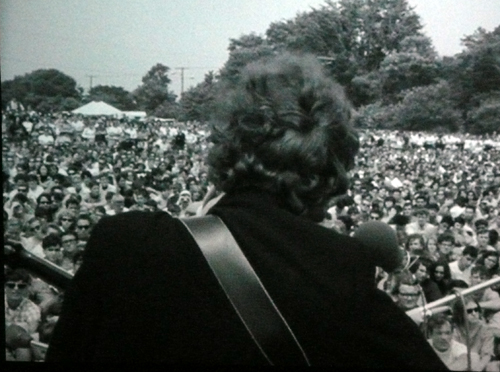 ‘The Green Fields of France’ or ‘No Mans Land’

Well, how’d you do, Private Willie McBride,
D’you mind if I sit down down here by your graveside?
I’ll rest for awhile in the warm summer sun,
Been walking all day, Lord, and I’m nearly done.
I see by your gravestone you were only nineteen
When you joined the glorious fallen in 1916,
I hope you died quick and I hope you died “clean,”
Or, Willie McBride, was it slow and obscene?
CHORUS:
Did they beat the drum slowly, did they sound the fife lowly?
Did the rifles fire o’er ye as they lowered ye down?
Did the bugles sing “The Last Post” in chorus?
Did the pipes play the “Floors’ The Forest”?
And did you leave a wife or a sweetheart behind
In some faithful heart is your memory enshrined?
And, though you died back in 1916,
To that loyal heart are you forever nineteen?
Or are you a stranger, without even a name,
Forever enshrined behind some glass pane,
In an old photograph, torn and tattered and stained,
And fading to yellow in a brown leather frame?
Well, the sun’s shining down on these green fields of France;
The warm wind blows gently, the red poppies dance.
The trenches have vanished long under the plough;
No gas and no barbed wire, no guns firing now.
But here in this graveyard it’s still No Man’s Land;
The countless white crosses in mute witness stand
To man’s blind indifference to his fellow man.
And a whole generation who were butchered and damned.
And I can’t help but wonder now, Willie McBride,
Do all those who lie here know why they died?
Did you really believe them when they told you “the cause?”
Did you really believe that this war would end wars?
Well the suffering, the sorrow, the glory, the shame,
The killing, the dying, it was all done in vain,
For Willie McBride, it’s all happened again,
And again, and again, and again, and again.

Now when I was a young man I carried me pack
And I lived the free life of the rover.
From the Murray’s green basin to the dusty outback,
Well, I waltzed my Matilda all over.
Then in 1915, my country said, “Son,
It’s time you stop ramblin’, there’s work to be done.”
So they gave me a tin hat, and they gave me a gun,
And they marched me away to the war.
And the band played “Waltzing Matilda,”
As the ship pulled away from the quay,
And amidst all the cheers, the flag waving, and tears,
We sailed off for Gallipoli.
And how well I remember that terrible day,
How our blood stained the sand and the water;
And of how in that hell that they call Suvla Bay
We were butchered like lambs at the slaughter.
Johnny Turk, he was waitin’, he primed himself well;
He showered us with bullets, and he rained us with shell —
And in five minutes flat, he’d blown us all to hell,
Nearly blew us right back to Australia.
But the band played “Waltzing Matilda,”
When we stopped to bury our slain,
Well, we buried ours, and the Turks buried theirs,
Then we started all over again.
And those that were left, well, we tried to survive
In that mad world of blood, death and fire.
And for ten weary weeks I kept myself alive
Though around me the corpses piled higher.
Then a big Turkish shell knocked me arse over head,
And when I woke up in me hospital bed
And saw what it had done, well, I wished I was dead —
Never knew there was worse things than dying.
For I’ll go no more “Waltzing Matilda,”
All around the green bush far and free —
To hump tents and pegs, a man needs both legs,
No more “Waltzing Matilda” for me.
So they gathered the crippled, the wounded, the maimed,
And they shipped us back home to Australia.
The armless, the legless, the blind, the insane,
Those proud wounded heroes of Suvla.
And as our ship sailed into Circular Quay,
I looked at the place where me legs used to be,
And thanked Christ there was nobody waiting for me,
To grieve, to mourn and to pity.
But the band played “Waltzing Matilda,”
As they carried us down the gangway,
But nobody cheered, they just stood and stared,
Then they turned all their faces away.
And so now every April, I sit on my porch
And I watch the parade pass before me.
And I see my old comrades, how proudly they march,
Reviving old dreams of past glory,
And the old men march slowly, all bones stiff and sore,
They’re tired old heroes from a forgotten war
And the young people ask “What are they marching for?”
And I ask meself the same question.
But the band plays “Waltzing Matilda,”
And the old men still answer the call,
But as year follows year, more old men disappear
Someday, no one will march there at all.
Waltzing Matilda, waltzing Matilda.
Who’ll come a-waltzing Matilda with me?
And their ghosts may be heard as they march by the billabong,
Who’ll come a-Waltzing Matilda with me?

Come you masters of war
You that build all the guns
You that build the death planes
You that build the big bombs
You that hide behind walls
You that hide behind desks
I just want you to know
I can see through your masks
You that never done nothin’
But build to destroy
You play with my world
Like it’s your little toy
You put a gun in my hand
And you hide from my eyes
And you turn and run farther
When the fast bullets fly
Like Judas of old
You lie and deceive
A world war can be won
You want me to believe
But I see through your eyes
And I see through your brain
Like I see through the water
That runs down my drain
You fasten the triggers
For the others to fire
Then you set back and watch
When the death count gets higher
You hide in your mansion
As young people’s blood
Flows out of their bodies
And is buried in the mud
You’ve thrown the worst fear
That can ever be hurled
Fear to bring children
Into the world
For threatening my baby
Unborn and unnamed
You ain’t worth the blood
That runs in your veins
How much do I know
To talk out of turn
You might say that I’m young
You might say I’m unlearned
But there’s one thing I know
Though I’m younger than you
Even Jesus would never
Forgive what you do
Let me ask you one question
Is your money that good
Will it buy you forgiveness
Do you think that it could
I think you will find
When your death takes its toll
All the money you made
Will never buy back your soul
And I hope that you die
And your death’ll come soon
I will follow your casket
In the pale afternoon
And I’ll watch while you’re lowered
Down to your deathbed
And I’ll stand o’er your grave
’Til I’m sure that you’re dead
Copyright © 1963 by Warner Bros. Inc.; renewed 1991 by Special Rider Music

Where have All The Flowers Gone