A selection of medieval depictions of disability from Marvellous to Behold: Miracles in Medieval Manuscripts, Deirdre Jackson, 2007 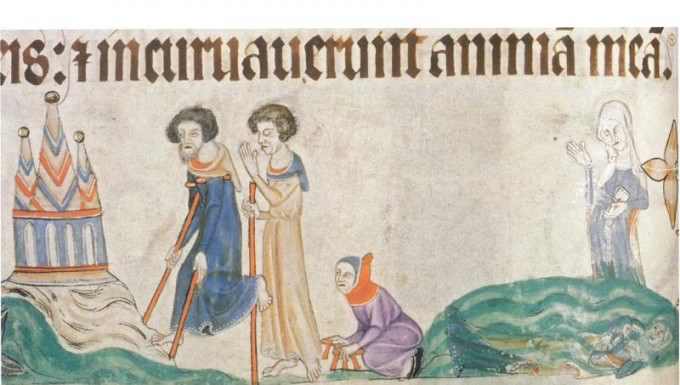 Most of the portrayals of disabled people from the 10th to end of 13th Century are to be found in illustrated hand coloured and drawn manuscripts, miniature paintings from greater Persia and stain glassed windows produced by unknown artisans or artists.. They are mainly moral tales and tales of miracles deriving from the religious stories of Judaism, Christianity and Islam. A paralytic healed by Cuthburt’s Shrine and a baby and youth cured by relics (a hair) of St Cuthbert. Bede’s Life of Saint Cuthburt ,Durham 1200.

Often disabled pilgrims were portrayed on their way to a holly shrine for a cure. Pilgrims, 2 lame and one blind, on their way to Mount St.Michel in France. The Luttrel Psalter Lincoln 1325

Sometimes just a thorn from Christs Crown, nails from his cross or his winding sheet-the holy grail were attributed with cures. Fighter with a crutch! Luttrell Psalter 1325.  In medieval England, the ‘leprechaun’, the ‘blynde’, the ‘dumbe’, the ‘deaff’, the ‘natural fool’, the ‘creple’, the ‘lame’ and the ‘lunatick’ were a highly visible presence in Everyday life and reflected in Manuscript illustrations. Timur the Lame or Tamberlain featured in of minatures. The unlikely combination of a war leader who captured a sizeable central Asian empire whilst bein disabled from injuries in his leag and hand. Tamberlain in Anatolia. Tamerlane who won the Ankara war against the Ottoman Sultan Bayezid I in July 28, 1402

He did not immediately left Anatolia and stayed there for approximately one year.  http://www.bbc.co.uk/news/magazine-20538810 Timur defeats the Sultan of Delhi