Tony Heaton was born in Preston, Lancashire. At the age of 16, a motor bike accident left him with a spinal injury, he switched from a comprehensive school to a local arts college at Southport. From 1972, he was self employed as artist, sign writer, disc jockey, record shop proprietor, progressive rock band member and mural painter. According to a Disability Arts Online profile, at this period “Heaton gathered enormous expertise and self-reliance whilst appearing to drift aimlessly”  In 1986 he enrolled on a visual arts degree at Lancaster University whilst earning a living as a sign-painter

Heaton was CEO of Shape Arts for 9 years of it’s 40-year history, and is now chair of the organisation. Prior to Shape Tony was the Director of Holton Lee for over 10 years, a disability-led arts organisation through whose doors many Disability Arts Movement artists passed. Throughout the past 30 years Tony has been a practicing artist in the field of sculpture and performance art.

Tony’s sculpture work has been widely profiled. ‘Monument to the Unintended Performer’ was installed on the Big 4 at the entrance to Channel 4 TV Centre in celebration of the 2012 Paralympics. It was, in his words, ‘created in recognition of all those disabled people who are subject to scrutiny simply by getting on a bus in a wheelchair or walking down the street with a white cane.’ 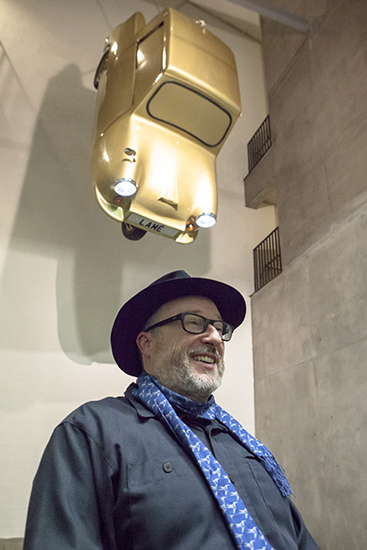 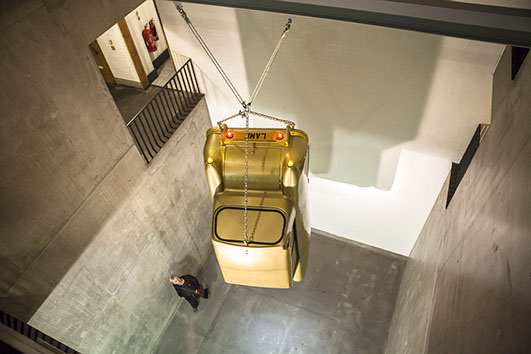 This sculpture began, as many do, with a conversation. This particular conversation was with the Curator of the ‘Art of the Lived Experiment’, Aaron Williamson, concerning alchemy, the idea of turning a base metal into gold, turning something of little value into a substance of value, a speculative philosophy. The objective of alchemy, the quest for transmutation, was often primarily aimed at effecting personal change in the Alchemist. The changing of objects and meaning has been constant within my practice as an artist, and, for this current work and response to the idea of ‘the art of the lived experiment’ I have selected an iconic object, the Invacar, and the notion of transmutation, the effecting of personal change. Its complicated, I transmuted from Biker to Invalid. I was issued with an Invacar in 1971. The Invacar was a societal response, initiated by government, to the lack of access to so-called public transport. The solution was to provide Invalids with a form of very cheap transport, though considered a prosthetic, a medical replacement for legs.  An unlined fiberglass shell, 9’.9” long and 4’.6” wide, a single seat, sat on a chassis of three wheels, space for a folding wheelchair, propelled by a small motorcycle engine with a cubic capacity of 197, three gears plus reverse and a maximum speed of around 45 mph. The single seat meant that you travelled alone, the assumption had to be that you had no friends, family, lovers, the solitary cripple, other. They were all painted the same colour, to mark you out as other. A pale blue, NHS Blue, this became know as Spazz Blue. It was banned from motorways. This was clearly stated on all motorway signage. No Invalid Carriages. It disappeared from the roads of Britain in 1983, and like all icons can now only be witnessed, restored pristine, in the museum. But this one escaped, suspended, transformed from prosthetic to sculpture, transmuted from Spazz Blue to Gold, Lame to Lamé. 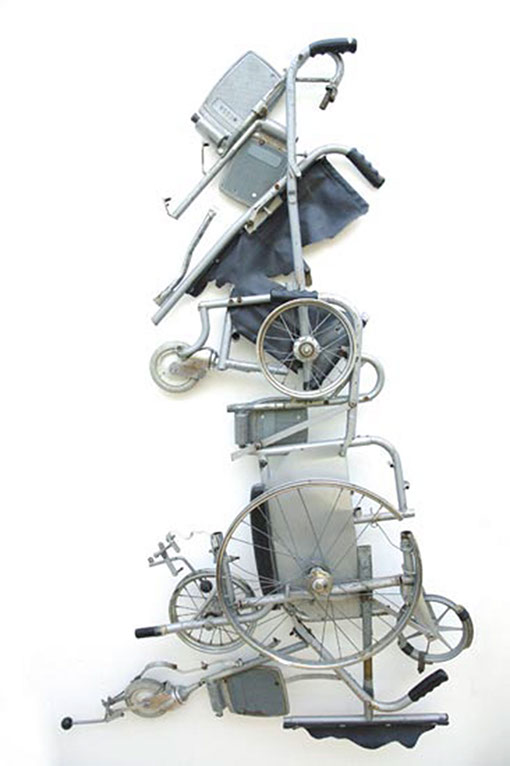 GREAT BRITAIN FROM A WHEELCHAIR

‘Great Britain from a Wheelchair’ is a map of Britain made from parts of two grey NHS wheelchairs. When Tony first told me about this work as he was making it, it seemed a rather foolish and unworkable idea. I was wrong: it’s wonderful – I described it elsewhere as ‘like a disability version of one of my very favourite art works, the bull’s head which Pablo Picasso made from a bicycle saddle and handlebars.’ First seeing it, in the ‘Unleashed’ exhibition earlier this year, I found that initially it just looked like a lot of bits of old wheelchairs. As with those 3D prints, it took a while to adjust perceptually. Then suddenly it sprang into place – a complete, startlingly real map of Great Britain. A delightful game, it forms a wonderful repudiation of the value judgement (‘This is for some tragic bastard’, in Tony’s words) implicit in the wheelchairs’.  Allan Sutherland (edited from DAIL magazine)

Heaton’s 1992 performance of his famous piece, ‘Shaken Not Stirred’, was part of the ‘Block Telethon’ protests. Through the destruction of a pyramid of over 1,000 charity collecting cans, this piece emphasised the needs for social rights as opposed to charity. 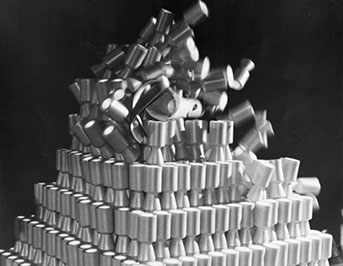 Great Britain from a Wheelchair